After riding the scooter for 8 trips, it's quit on me. It's been going so well, too! It started so easily, and worked so well. Now it stalls whenever I try to accelerate. I can even sit on it, hold it back with my feet on the ground, and stall it by applying some throttle.

I asked the Honda Spree scooter forums what was going wrong; they told me to clean the carburetor. So this weekend I took it apart and checked on some other problems I had, too.

I quickly discovered that NOBODY sells scooter parts in Orlando. Even with a Honda part number, I couldn't get a fuel filter. No clear vinyl hose for the fuel line, either. Sigh.

I tested the oil sensor, which involved not fully reading the instructions and spilling oil all over the driveway. :'( It turns out it's been working all along, which means I didn't run it out of oil. That was a relief.

I also tested the fuel valve, which worked; checked the spark, which was fine; pulled an extra gasket out of the air filter box; and plugged an air intake hole (using duct tape). I think someone deliberately hacked out the hole with a screwdriver, to lean out the fuel mixture. Here's a picture, with a 10mm nut next to the hole for scale: 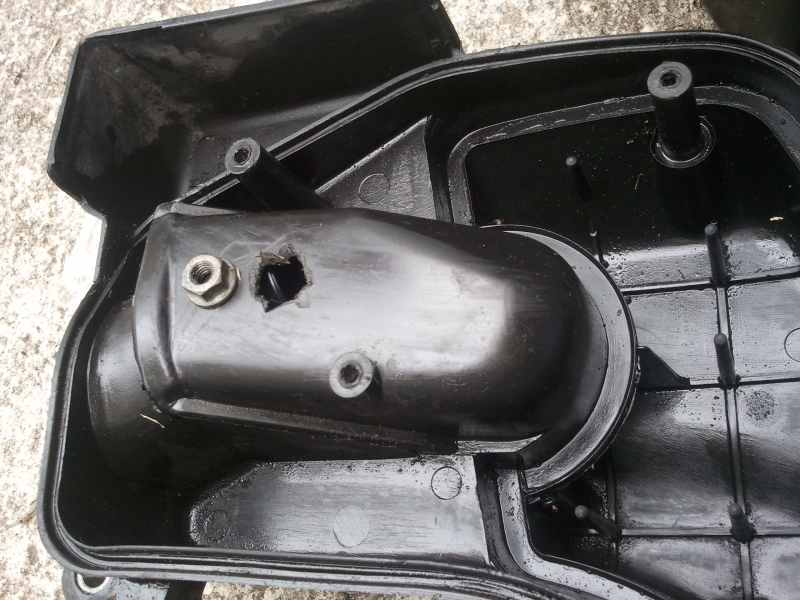 I think this thing may be missing as much as 1/3 of its screws and bolts. One very common bolt was missing, replaced by a piece of twisted wire, which pissed me off. What kind of cut-rate mechanic has been working on this thing, anyway? It's a 20-cent 10mm 5/8" 20-thread bolt, for cryin' out loud!

I spent nine hours working on this thing, including cleaning off the all the engine grease and cleaning the carburetor. The carb seemed to be just fine, with no clogging or other problems.

Then I ran a compression test. 30 psi. It's supposed to be between 90 and 115. This is obviously a huge problem; but then, why was it starting so easily? I decided that I must have measured incorrectly; I'll let it go until I can see if the carb cleaning was any help.

After I put everything back together, the scooter won't start at all. I'm recharging the battery right now, in case the problem was just that the pump needed priming.

I'm considering bicycling to work. It'd only take 45 minutes or so, and I'd get some exercise. Plus, it'd be cheap, and I'd be able to fix anything that went wrong.

Hey, I could even electrify it! Maybe if I can sell The Red Devil, I can finance an electric bike conversion...